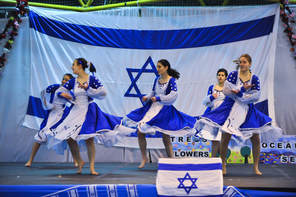 ISRAELI ARTS AND CULTURE
Today’s Israel is a vibrant kaleidoscope of sights, sounds, tastes, ideas, people, and cultures. Often when teaching Israel, we focus on facts and events, ignoring the dynamic and intense life that is lived. By engaging with the world of arts and culture, however, we are presented with an ideal vehicle for exploring a vibrant vision of Israel.
Arts and culture provide a reflection on the heart of the people and the pulse of society; they bring to the surface themes and ideas that may not find expression in other ways. They frequently serve as commentary on a particular culture by showing an x-ray of life under certain circumstances at a given time and place. The artists who comment on Israeli culture and society through visual art, literature, poetry, film, dance, music, theater, and other artistic expressions provide the educator with material to delve into Israeli society in a way that speaks not only to the minds of students, but also to their hearts and souls. It is through the common language of art—a language not always verbal—that one gets a hands-on appreciation of a society in the deepest sense.

Though the modern State of Israel has officially been independent only since 1948, its unique blend of dynamic arts and different cultural traditions has been around for some time longer. Part of what makes the art scene in Israel so unique is that the country blends so many varying influences from all over the Jewish world. In the case of folk arts, for example, a wide range of crafts can be found flourishing–from Yemenite-style jewelry making to the embroidery and other needle crafts of the Eastern European Jews. Over the last half-century, as artisans have mixed and mingled and learned from one another, a certain “Israeli” style of folk art has emerged, reflecting all of the cultures who make up the modern state.