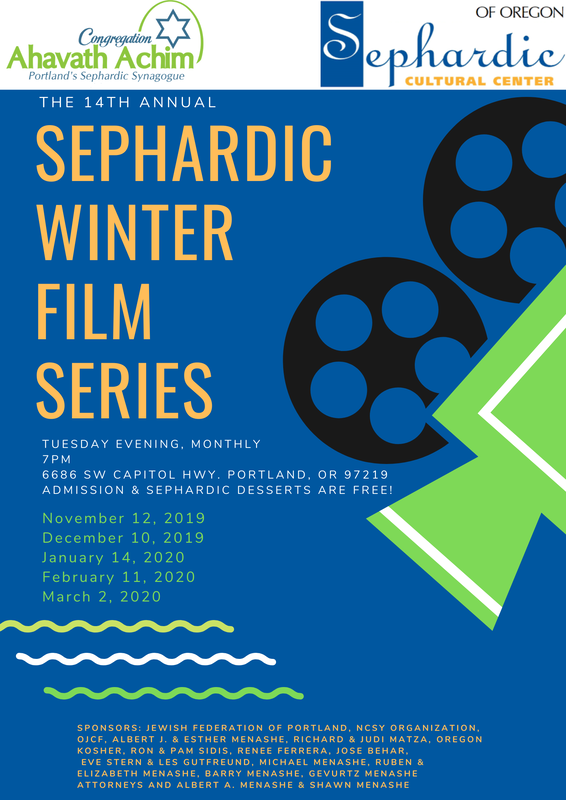 November 12, 2019.  DOUBLE FEATURE NIGHT
Rhodes Forever.  This documentary looks at the pre-WWII history of Rhodes from a less known perspective. In addition to examining the culture of the community, and instead of concentrating on the destruction of Rhodes Jewry, this film documents the little-known immigration of a large segment of the community to the Belgian Congo and Europe.
French and Ladino languages w/English subtitles, 60 minutes, 2003, by Diane Perelsztejn


December 10, 2019.
The Jewish Frontier. This film examines the history of Jewish people and organizations who helped build the state of Oregon. Arriving with the gold miners in 1849, they came for a better life away from persecution.  Using rare historical photos, film, and more than two dozen interviews with people from all over the state, this film tells the story of pioneering Jews.
English language, 78 mins, Producer: OPB, Speaker: Judy Margles, OJMCHE Director


January 14, 2020.
A Kiss To This Land.  This fascinating film narrates the story of Jewish immigration to Mexico 1920-1930.  It is a tribute to an entire generation of both Sephardic and Ashkenazic Jews who built communities and new lives and dreams after leaving their homes in Europe and the Middle East.  This film has humor, love, adventure, joy and sadness.
Spanish w/ English subtitles, 83 minutes, Producer: Daniel Goldberg, Speaker: Jose Behar

February 11, 2020.
GI JEWS: Jewish Americans in WWII.
This film tells the story of 550,000 Jewish American men and women who fought in World War II.  In their own words, veterans both famous and unknown bring their war experiences to life; how they fought for their nation and their people, struggled with anti-Semitism within their ranks, and emerged transformed, more powerfully American and more deeply Jewish.
English, 90 minutes, 2017, Producer: Lisa Ades Speakers: Rick Cohen & Boby Brown


March 3, 2020.  DOUBLE FEATURE INTERNATIONAL NIGHT
The Nazi Games – Berlin 1936.  This Film chronicles the story of how the Nazis and the International Olympic Committee turned a relatively small, elitist, sports event into an epic global mass media spectacle. The grand themes replete with architectural grandiosity, budget overruns, corruption, bribery, collusion with unsavory characters – including dictators and autocrats – and the ill treatment of black and Jewish athletes.  This is a study of deception.
English language, 61 minutes, 2016, Produced by Taglicht Media.


Holocaust Escape Tunnel.  For centuries the Lithuanian city of Vilna was one of the most important Jewish centers in the world, earning the name “Jerusalem of the North”.  The Nazis murdered 95% of its Jewish population.  Now an international team of archaeologists is trying to rediscover this forgotten world, excavating the remains of its Great Synagogue and searching for one of its great secrets: a lost escape tunnel dug by Jewish prisoners inside a horrific Nazi execution site.
English language, 2016, 60 minutes, Produced by PBS, Speaker: Natan Meir, PSU
PLEASE NOTE THE NEW LOCATION FOR ALL SCREENINGS:
Congregation Ahavath Achim’s new sanctuary, located in Hillsdale
6686 SW Capitol Hwy.   Portland, OR 97219.  Call Ron at 503-750-0888